By Nadya Sbaiti
​[On 26 March 2021 the Centers for Middle East Studies at Harvard University and the University of California, Santa Barbara, as part of the yearlong collaborative project “Ten Years On: Mass Protests and Uprisings in the Arab World,” held a roundtable titled “Archives, Revolution, and Historical Thinking.” The persistence of demands for popular sovereignty throughout the Middle East and North Africa in the past decade, even in the face of re-entrenched authoritarianism, imperial intervention, and civil strife is a critical chapter in regional and global history. The following is one of several written contributions elaborating on the discussion addressing the relationship between archives, historical thinking, and revolution—both past and present. Click here to read the remaining contributions to this roundtable.]

“We have lain dormant twenty years, hoping for a better life and waiting for a blossoming future, believing the chimerical pretensions of some and blindly placing all of our confidence in those who hold our money, we accepted their laws, their pressure and . . . we find ourselves finally […] facing the impenetrable obstacles knowingly prepared by our republican regime, or rather by those who pretended and still pretend to be “ZEALOUS PATRIOTS. […] If the government takes our demands into consideration, it will have avoided a frightening massacre and saved the lives of those who would be victims of these bad rulers.”[1]

This is the opening salvo in a densely worded, three-page letter that students in Lebanon, women and men, sent to the French High Commissioner in July 1940. The full letter is a scathing indictment of the entire edifice of the French mandate in Lebanon and its ostensible purpose. Therein, the students especially demanded the elimination of the second part of the baccalaureate exam, the final gatekeeping hurdle to access to higher education, and which the French authorities had intentionally and admittedly made more difficult several years earlier, for just that reason. The students couched their demands within the larger framework and vocabulary of corruption, patriotism, national governance, and demands for social and economic justice. 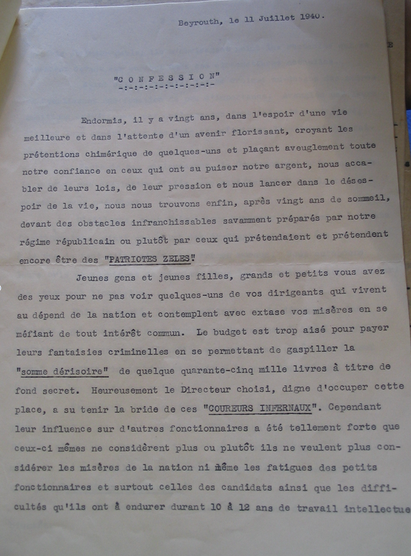 Figure 1. First page of the three-page letter that students in Lebanon, women and men, sent to the French High Commissioner in July 1940
I came across this letter while conducting archival work for my dissertation, in the archive of the Ministère des Affaires Étrangères, at the Centre des Archives Diplomatiques de Nantes. It was one of millions of documents that comprise France’s extensive repository of materials pertaining to the social, cultural, religious, economic, and political lives of the people who lived within its mandate and protectorate territories. Upon departing from the region, at least militarily, the French authorities took all the records with them.
It is impossible to read this letter today, or any such document of that period, without reckoning with the 2019 Lebanese uprising, which its participants referred to as al-thawra, the revolution. The central presence of students at every level of schooling in the uprising is one testament to the resonance between 1940 and 2019. It is a reminder of a longer history of students demanding better lives and more equitable futures in Lebanon. Rereading the students’ letter in 2021, I think about the hours, the days, the weeks of organizing that went into writing it. I think about the energies and efforts as well as the frustrations and connections that students forged to coordinate across the country. Did they all agree on the final text? How did they decide what to leave in and what to take out? Who dissented and why? How did they coordinate their grievances across schools, languages, and politics?
These were questions I do not recall asking when I first read this letter over a decade ago. I was not able to imagine the details or the organizing and activist efforts, certainly not as viscerally as I now cannot but do, rereading it in the wake of the last eighteen months of layered crises in Lebanon. A decade ago, I could intellectually grasp the despair that punctuated the students’ “quest for a better life.” But today, having organized and participated in the Lebanese uprising, and having since lived through a crushing collapse of Lebanon’s political and economic systems, my angle of vision has been dramatically altered. I now have a visceral sense of the hopelessness that drove the students’ words. I can now feel the depths of the fall from the promise of a better future to a foreclosed tomorrow. These students of the 1940s articulated their fear of violence, the threat of a massacre that collapsed their imaginings of a better future. Today, I understand that fear, that despair of foreclosure, through the deep and abiding rage in my bones.
Much of what I am saying is, perhaps, indicative of my own inexperience and privilege at the time of “first contact” with this source. But it is just as instructive of what it means for many of us working on and in the region, who have been rereading sources, or coming across them for the first time, in the wake of a decade of uprising, protest, revolution, triumph, and collapse. How do we bring our emotions to our archival readings, especially in moments of political upheaval, hope, and despair? As graduate students, we are trained to understand how historical analysis is always already subjective. At the same time, we are taught to check our emotions at the door; our feelings should somehow remain “apart.” Enough of this dispassion. Our emotions feed our imagination, and our ability to not simply empathize with the struggles of the past, but to feel them and in turn communicate this feeling through our teaching and writing.
I found this letter in the archive of the Ministère des Affaires Etrangères (MAE) in Nantes. The location matters: we must attend to the spaces in which documents are collected, curated, and later “found” by the researcher. There is much material in the French archives in Nantes that record and reflect student activism and anticolonial protest more broadly; scrutinizing archival provenance is crucial. Those documents are in Nantes because they were addressed to colonial authorities, who deemed them pertinent or threatening enough to preserve.
Today in the wake of the immense possibilities that were opened and foreclosed in Lebanon, questions of writing and making history take on a new force. How do we archive revolution and emotion? What would an archive of protest/revolution look like? How would we assemble one? How would this letter be read and reread if it were put in archival conversation, in archival storage, with other such records? How would this letter be read alongside another type of source I want to briefly mention: an audio recording of a 1957 graduation speech, from the archive of Ahliah Girls’ School in Beirut, in which the headmistress encouraged political engagement and protest as part of female students’ civic duty. What would this 1940 letter, and similar sources, convey if I had seen it in a school archive instead, among curricula and textbooks, correspondence, and graduation speeches? In Nantes, this document indicating a student protest is an irritating fly in the ear of the colonial apparatus. In the school archive, it is an empowering call, part of a school’s pride, a legacy it bequeaths. For the present to matter, we must bring emotion, location, and conversation together. When future historians archive the current moment of protest, promise, and collapse, how will they do it? Where will they put it? And who will have access to it?
Footnotes:
​
[1] Centre des Archives Diplomatiques de Nantes, Ministère des Affaires Etrangères, Fonds Beyrouth, Série Instruction Publique (hereafter, MAE, FB/SIP), Box 161, classement: Incidents Scolaires. Letter entitled “Confession,” 11 July 1940. Capitals and quotation marks in original.