Women's Filmmaking in the Aftermath of the Uprisings (13 November 2021)

Displacement, Disruption and Scholarly Production in the Aftermath of Uprisings (3 November)

Activism in Exile: Diasporic Communities in the Wake of the Arab Uprisings (30 September 2021)

Media Framing of Political Events in Lebanon:
From Uprising to Blast & Aftermath (11 June 2021)

Disciplinary Woes and Possibilities:
​  Political Science in the Context of the Uprisings

This panel explores how the example of the Arab uprisings can be brought to bear on the production of general knowledge in political science. Viewing the uprisings as complex, ongoing, and multifaceted processes of sociopolitical transformation already helps avoid the problems of teleology that have bedeviled a number of approaches to the study of politics—from modernization theory through the democratic transitions literature, from research on “political development” to studies of authoritarian resilience, from “political culture” to various forms of political economy research. Taking this rejection of teleology as a point of departure while at the same time embracing theories and voices from and about the Middle East, we ask: What kinds of conceptual, theoretical, and methodological tools might we develop to bridge the gap between mainstream political science and real-life events? What, framing the question more broadly, is the relation between theory and practice, and how can the uprisings illuminate that relation? What theories and methods central to political science are the most relevant or thought-provoking regarding the uprisings? Assuming a broader definition of politics is useful, how can it be operationalized in studying the Arab uprisings and their reverberations? What approaches, in particular, need to be revamped,  dismissed, or even outright rejected? 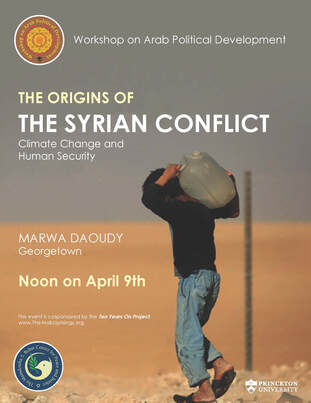 Over the past decades, a climate-conflict nexus emerged, increasingly making reference to the Syrian conflict. According to this logic, climate change caused the 2006-2010 drought in Syria, the drought caused agricultural failure, agricultural failure caused poverty and discontent culminating in the 2011 uprisings. The bulk of climate-based analyses were made by climate scientists and think-tanks based in Europe and the USA. While global warming is real and international action is urgently needed, climate change was not at the forefront of the minds of Syrians in 2011. Instead, most people were focused on a moral ideal: the end of repression and social injustice.
​
Building on a critical environmental security perspective, Marwa Daoudy challenges core assumptions behind the climate-conflict hypothesis. As such, her book The Origins of the Syrian Conflict: Climate Change and Human Insecurity (Cambridge University Press 2020) offers a new conceptual framework -“Human-Environmental-Climate Security” (HECS)- to analyze the interactions between human insecurity, climate security, and political and economic structures. The book identifies the ideological and policy drivers of human insecurity which impacted the Syrian population’s access to water and food. Using official primary sources, debates amongst experts at the domestic level, as well as interviews with Syrian experts, activists, and refugees in Lebanon and Turkey, the author explores how the policy decisions of the Syrian government under Hafez al-Assad and Bashar al-Assad significantly contributed to the vulnerability of the rural population in the decades that preceded the uprising. A longitudinal analysis of key indicators in 1998-2001 (“Drought 1”) and 2006-2010 (“Drought 2”) clearly points to a vulnerability nexus in the three governorates (Hassake, Deir ez-Zor, and Raqqa) where unusually high levels of poverty, unemployment particularly in agriculture, and high dependence on the agricultural sector already existed. These dynamics increased economic and social vulnerability, creating an urban-rural divide. Corruption and migration were also large sources of human insecurity. By 2010, it was clear that the neoliberal reforms had not been successful. The book concludes that, ultimately, political factors were more important than a climate-induced drought in the build up to 2011. This perspective can be more broadly applied to the Global South. It seeks to move beyond deterministic narratives and orientalist biases about the risks of population growth and mobility, demand-induced scarcity, resource depletion, and insecurity—all of which fall into patterns of core-periphery and North-South divides. 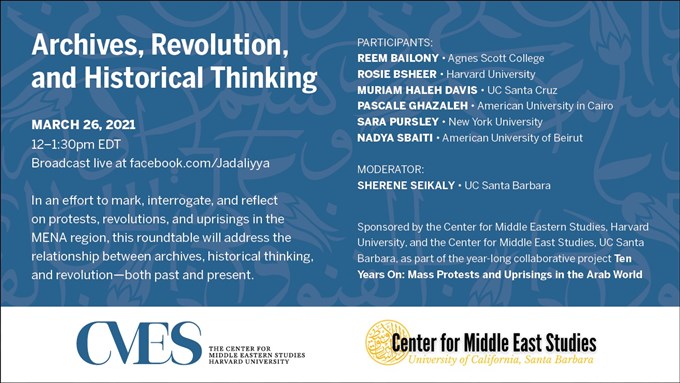 This roundtable was organized in an effort to mark, interrogate, and reflect on various protests, revolutions, and uprisings in the Middle East and North Africa in the past ten years. Featuring a collection of scholars of the MENA region from a variety of disciplines, this event placed emphasis on the relationship between archives, historical thinking, and revolution—both in the past and present. ​

Syria Ten Years On:
Art, Journalism, and the Struggle over Narrative 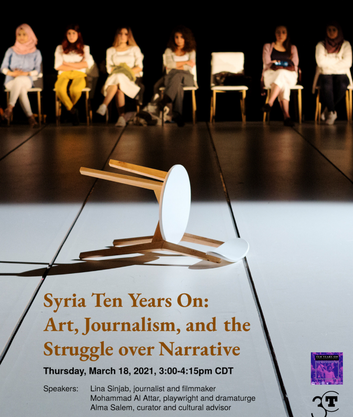 This panel marks the tenth anniversary of the Syrian uprising with a conversation among three artist-journalist-curators who participated in the exhilarating initial days of the Syrian revolution. The topics to be discussed include: the struggle over narrativizing the revolutionary past and producing a sense of transformative ongoingness in the present; the relevance of different forms and genres of artistic and journalistic expression (specifically, documentary and feature filmmaking, visual arts, theater, curation, reportage, and cultural critique); and more general reflections on the relationships between aesthetics and radical politics.

Speakers include Mohammad Al Attar, a playwright and dramaturge; Alma Salem, a curator and cultural advisor; and Lina Sinjab, a journalist and filmmaker. 3CT co-director and Jadaliyya co-editor Lisa Wedeen will moderate the discussion.

Friday, March 5, 2021    12:00 – 1:00 p.m. Register Here.
​
​Sherine Hafez is professor and department chair of Gender and Sexuality Studies at University of California Riverside. She is the co-editor of the Journal of Middle East Women’s Studies (JMEWS) and served as president of the Association of Middle East Anthropologists (AMEA). Hafez’s research focuses on Islamic movements and gender studies in Arab and Middle Eastern cultures. Her new book, Women of the Midan: The Untold Stories of Egypt’s Revolutionaries (Indiana University Press 2019), discusses Egypt’s revolutionary women and gendered corporeal resistance in the Middle East.
Hafez is the author of The Terms of Empowerment: Islamic Women Activists in Egypt (2003), which questions the applicability of western liberal conceptions of empowerment to Islamic women's activism. Her second book, An Islam of Her Own: Reconsidering Religion And Secularism In Women's Islamic Movements (New York University Press 2011), challenges binary representations of women's subjectivities in Islamic movements by relating the interplay between the complex debates of modernity and postcoloniality to the particular historicity of Islam and secularism. She co-edited Anthropology of the Middle East and North Africa: Into the New Millennium (Indiana University Press 2013). Her articles have appeared in American Ethnologist; Signs: Journal of Women in Culture and Society; Feminist Review; Journal of Middle East Women’s Studies; and Journal of North African Studies. Hafez lectures on gender studies in the Middle East and Muslim-majority countries, Islamic movements, women’s Islamic activism and in the uprisings in the Arab World.

Thursday, 25 February 2021           12:00 pm - 2:30 pm EST         Learn more
Join us for the second monthly signature panel event of the Ten Years on Project: Mass Protests and Uprisings in the Arab World project. This is the second in a year-long series of events and knowledge production by the collaborative Ten Years On project. Panelists will discuss a range of ideas and reflections related to pedagogy and teaching the Arab Uprisings.

The January 25 Uprising at Ten:
​Incomplete Struggles and Evolving Trajectories in Egypt 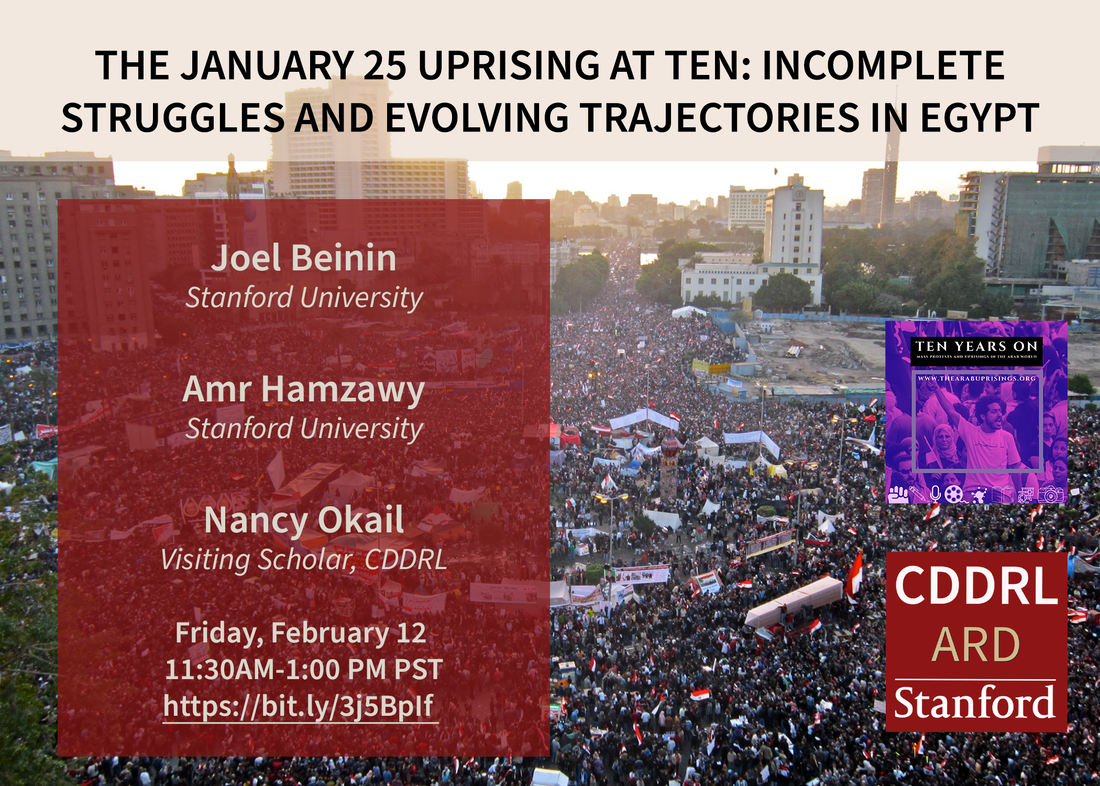 To mark the 10-year anniversary of Egypt’s January 25 Uprising and the ouster of Hosni Mubarak, this panel examines the trajectory of authoritarianism in the country over the past decade. The panelists reflect on a variety questions including: How have political developments in Egypt and elsewhere in recent years informed our understanding of the January 25 Uprising and its significance? In what ways have authoritarian institutions adapted in the aftermath of the 2011 uprising and how have they shaped the prospects for political change and/or stability? Where are the sites of political contestation and resistance in today’s Egypt?

Joel Beinin is the Donald J. McLachlan Professor of History and Professor of Middle East History, Emeritus at Stanford University. From 2006 to 2008 he served as Director of Middle East Studies and Professor of History at the American University in Cairo. In 2002 he served as president of the Middle East Studies Association of North America. Beinin’s research and writing focus on the social and cultural history and political economy of modern Egypt, Palestine, and Israel and on US policy in the Middle East. He has written or edited eleven books, most recently Workers and Thieves: Labor Movements and Popular Uprisings in Tunisia and Egypt (Stanford University Press, 2015); Social Movements, Mobilization, and Contestation in the Middle East and North Africa, 2nd edition (Stanford University Press, 2013) co-edited with Frédéric Vairel; and The Struggle for Worker Rights in Egypt (Solidarity Center, 2010).

Amr Hamzawy is currently a senior research scholar at the Center on Democracy, Development, and the Rule of Law at Stanford University. He studied political science and developmental studies in Cairo, The Hague, and Berlin. He was previously an associate professor of political science at Cairo University and a professor of public policy at the American University in Cairo. Between 2016 and 2017, he served as a senior fellow in the Middle East program and the Democracy and Rule of Law program at the Carnegie Endowment for International Peace, Washington, DC. His research and teaching interests as well as his academic publications focus on democratization processes in Egypt, tensions between freedom and repression in the Egyptian public space, political movements and civil society in Egypt, contemporary debates in Arab political thought, and human rights and governance in the Arab world.

Nancy Okail is a visiting scholar at CDDRL. She has 20 years of experience working on issues of democracy, rule of law, human rights, governance and security in the Middle East and North Africa region. She analyzes these issues and advocates in favor of human rights through testimony to legislative bodies, providing policy recommendations to senior government officials in the U.S. and Europe. She is currently the president of the board of advisors of The Tahrir Institue for Middle East Policy (TIMEP), previously she was the Institute’s executive director since its foundation. Dr. Okail was the director of Freedom House’s Egypt program. She has also worked with the Egyptian government as a senior evaluation officer of foreign aid and managed programs for several international organizations. Dr. Okail was one of the 43 nongovernmental organization workers convicted and sentenced to prison in a widely publicized 2012 case for allegedly using foreign funds to foment unrest in Egypt.

Reflections on Mass Protests & Uprisings in the Arab World

These two panels are part of a series by the collective project "Ten Years On: Mass Protests and Uprisings in the Arab World." This is the first in a year-long series of events and knowledge production by the collective. Each of the panels addresses reflections by the speakers on the politics and knowledge production related to the uprisings during the past ten years. This first event is intended to herald the yearlong conversation/activities.